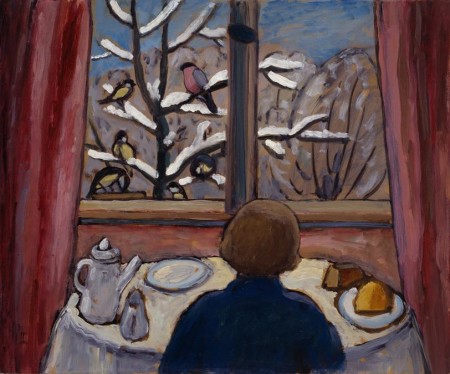 Breakfast of the Birds, 1934, Gabriele Munter.

My mother had a garden of several acres. Being sent out to weed a single row seemed like a life sentence. The plants stretched out to eternity. Knowing I wasn’t free until it was done was the worst feeling in the world.

That was before my brother and sister died in separate accidents four years apart. Then only did I really understand what misery was: a suffocating, joyless blanket, a distemper of the humours that held you in its grip for years on end, threatening to never leave.

This week has been pretty unpleasant. Painting three rooms simultaneously has been tedious in the extreme. “I am very sick of painting,” I texted my daughter.

“Sounds like you made a bad career choice,” she responded. Nyuk, nyuk.

I’m up and down a ladder, crouching to do the baseboard, constantly finding small mistakes. A lumbar disc is acting up. There aren’t enough pain-killers to obviate the pain. My mind feels like it’s going to seize up along with my calf muscles. I’m suffering a surfeit of this stately, lovely pearly grey. And, always, I feel the clock racing.

Obviously, that means I’m happy. Lack of pleasure is fleeting, but happiness is durable. It rests in knowing that this project is worthwhile, the capstone of a life raising kids in Rochester. I have complete faith that it will all work out in the end. 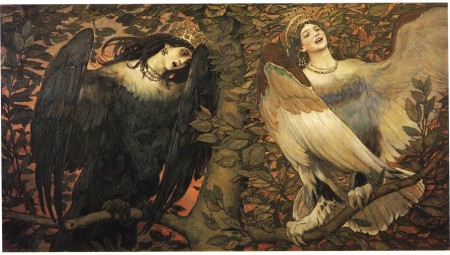 Sirin and Alkonost, The Birds of Joy and Sorrow, 1896, Viktor Vasnetsov

Then there’s joy. That most ineffable state is generally steady. That’s because it doesn’t come from any temporal reality. I can be knee deep in unpleasant work, I can be unhappy, but I trust God to make it right in the end.

What is the difference? Staying power. Pleasure is fleeting (as anyone who’s ever suffered a hangover can tell you), happiness lasts for a season or two, but joy lasts a lifetime.

This relates to yesterday’s post. If you become an artist because you crave success, you’re bound to be unhappy for most of your career. (You may not even achieve happiness until after you’re dead, if it’s so bound up with success.) If you’re an artist because you’re using the gifts given you by God, you’re going to be happy every day of your life. The same actions, framed differently, lead to very different outcomes.

Carol L. Douglas is a painter who lives, works and teaches in Rockport, ME. Her annual workshop will again be held on the Schoodic Peninsula in beautiful Acadia National Park, from August 6-11, 2017. Visit www.watch-me-paint.com/ for more information.

This blog has been archived

This blog has been archived and is no longer being updated.